The most commonly used is the Pt 100 Ohm probe

The temperature probe is often delivered with a connection head (see photo opposite).

Datasheet - catalogue - RTD temperature sensor
You can find below our most frequently asked questions / answers.

What are the advantages of a resistance probe compared to a thermocouple probe?

The choice of probe type depends on your application. A resistance probe is more accurate than the thermocouple and has a very good measurement stability. Moreover, it enjoys excellent repeatability of the measurement. See here our comparison chart. 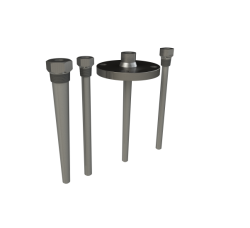